Nucleotopes and The Nuclei of the Elemental Isotopes

Abstract
Elements are characterized by the charge on the nuclear without regard for its arrangement. Isotopes of an element merely indicate that the nuclei have different masses, but the same outward charge. Isotopes are a chemical description based on that outward charge. The nuclear component interactions are largely independent of the exo-nuclear electrons that control the chemical interactions.

The current concept of the nuclei of isotopes is that they have all have the same number of protons and only differ by the number of included neutrons. This paper proposes an alternate model for the nucleus: the nucleotope. This model of nuclei has the number of protons and neutrons not differing from one another by more than a single unit. The outward nuclear charge is determined by the number of included β- particles. The model is applied to the elements of the periodic table, particularly addressing tritium and why elements above lead are unstable α-particle emitters. All images were generated by the author.

Royal Society "Open Science" has deemed this paper unfit for inquiring eyes based on this lone (quoted in its entirety) review: "The proposed model is in conflict with more than half a century of basic nuclear and atomic data (magic numbers, charge measurements of ions, nuclear mass measurements, fragmentation, to name a few) and all data supporting the Cabibbo–Kobayashi–Maskawa matrix of the standard model of particle physics."

"Charge measurements of ions" is not even discussed and the "nuclear mass measurements" used are those in the literature! Asserting that data supporting one model automatically excludes all other models is faulty reasoning.

Adherents of the standard model would not want any new and significantly different model in the literature. In an "open science" world, ALL conceivable models would be aired! 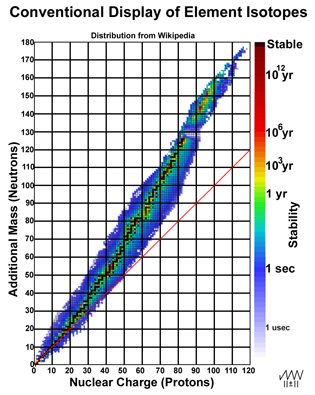 "The nucleus of an atom consists of protons and neutrons (two types of baryons) bound by the nuclear force (also known as the residual strong force). These baryons are further composed of subatomic fundamental particles known as quarks1 bound by the strong interaction. Which chemical element an atom represents is determined by the number of protons in the nucleus. Each proton carries a single positive charge, and the total electrical charge of the nucleus is spread fairly uniformly throughout its body."2  This view is little different than it was a century ago, except for the quarks.

"While protons define the entire charge of a nucleus and, hence, its chemical identity, neutrons are electrically neutral, but contribute to the mass of a nucleus to the same extent. Neutrons explain the phenomenon of isotopes – varieties of a chemical element which differ in atomic mass."2 The nucleus has minor influence on an element's chemistry beyond its charge and the orbitals of the electrons. Isotopes relate to chemistry; the character of the nuclei is a separate issue. In other words, the nuclei of an element's isotopes may have little in common with one another! Figure 1 (on the right) provides a typical display of the elements (nuclear charge/proton number/atomic number) with varying additional mass (neutrons) with each isotope color-coded3 to indicate its individual stability.

Plotting the distribution of the elemental isotopes as a function of their masses gives a decidedly different perspective of how the nuclei of the isotopes relate to one another. In Figure 2, the data in Figure 1 is tipped 45-degrees so that nuclear mass is evenly spaced along the x-axis. The y-axis grid is set 2 units/line with the 20-unit line passing through mercury (at #80, mass = 200) for reasons that will be clear later.

A number of general trends can be seen.

Before preceding to an explanation about the relationship of the nuclei of the different elements that have the same total mass, it is useful to explore the elements in the lowest mass region. The nuclei of the first eleven elements are illustrated in Figure 3. Beta-particle decays give vertical changes in elements without changing the nuclear mass: β- downward (increased atomic number) and β+ upward (decreased atomic number). Vertical changes should involve minor changes in the nucleus other than the beta-particle changes. 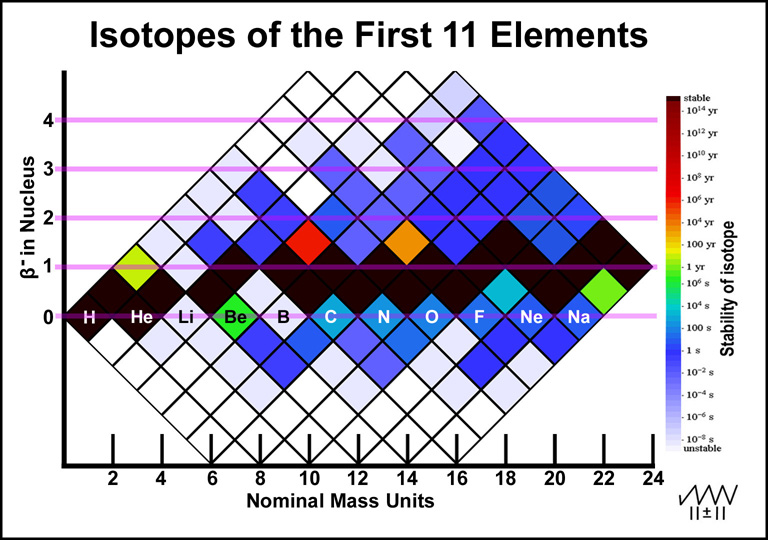 The first few elements do not have many ways for their nuclei to be assembled and therefore have few stable nuclei. Below are a few observations. Decay data is from Wikipedia.5

+ decay occurs below the stability zone. It is called β+ decay, but is more appropriately called "β- build with β+ release". Either a β+ is in the nucleus or more likely a neutral component of the nucleus separates into two oppositely charged beta-particles with the β- particle being retained and the β+ particle released with energy. This occurs vertically in the figure with hardly any change in mass and is often a lower energy mechanism than EC or proton release.

The Nucleotope Model of the Nucleus 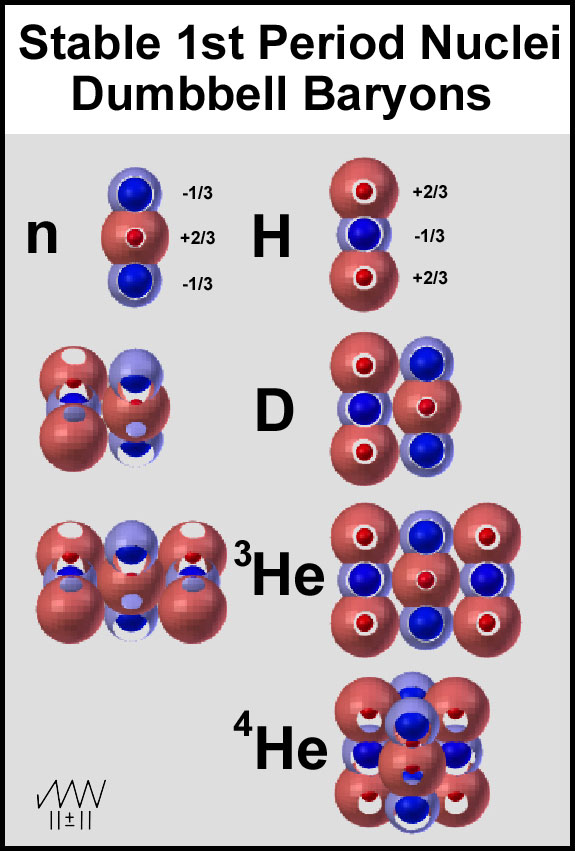 Without belaboring the issue, suffice it to say that the conversion of a neutron to a proton (down-quark converted to an up-quark) with the release of a β- particle and a neutrino defies logic6 when up and down quarks are considered basic, non-compounded, nuclear components. Similarly, the conversion of a proton to a neutron (up-quark converted to a down-quark) in the nucleus with the release of a β+ particle also defies logic for the same reason. While Feynman diagrams7 may describe such conversions, these quark conversions are, nonetheless, still illogical. A more logical model would have the β- and β+ particles derived from entities separate from the quarks which should remain unaltered.

Dumbbell models of the baryons (proton and neutron) provide the essence of the two observed quarks. While some would decry these dumbbells as too simplistic, they do indicate strong, multiple, electrostatic interactions between the two types of baryons. These features are presented in Figure 4. That the nucleus of each element in Figure 4 is stable attests to the stability of the baryons. Equal or near equal numbers of the two baryon types provide maximum electrostatic interactions. It is logical that as the total number of baryons increases that the baryons do so in pairs to maintain their template interactions. This was the rationale for putting a "20" line in Figure 2 through the 200 mass isotope of Hg-80. The Hg-80/200 nucleus would be composed of equal numbers of protons and neutrons (100 each) and 20 β- that set the outward charge of the nucleus to positive 80.

The y-axis of Figure 2 is now expanded in Figure 5 to show the effect of the included β- particles on the isotope stabilities more clearly. A periodic table8 is included for easy referencing to the elements. 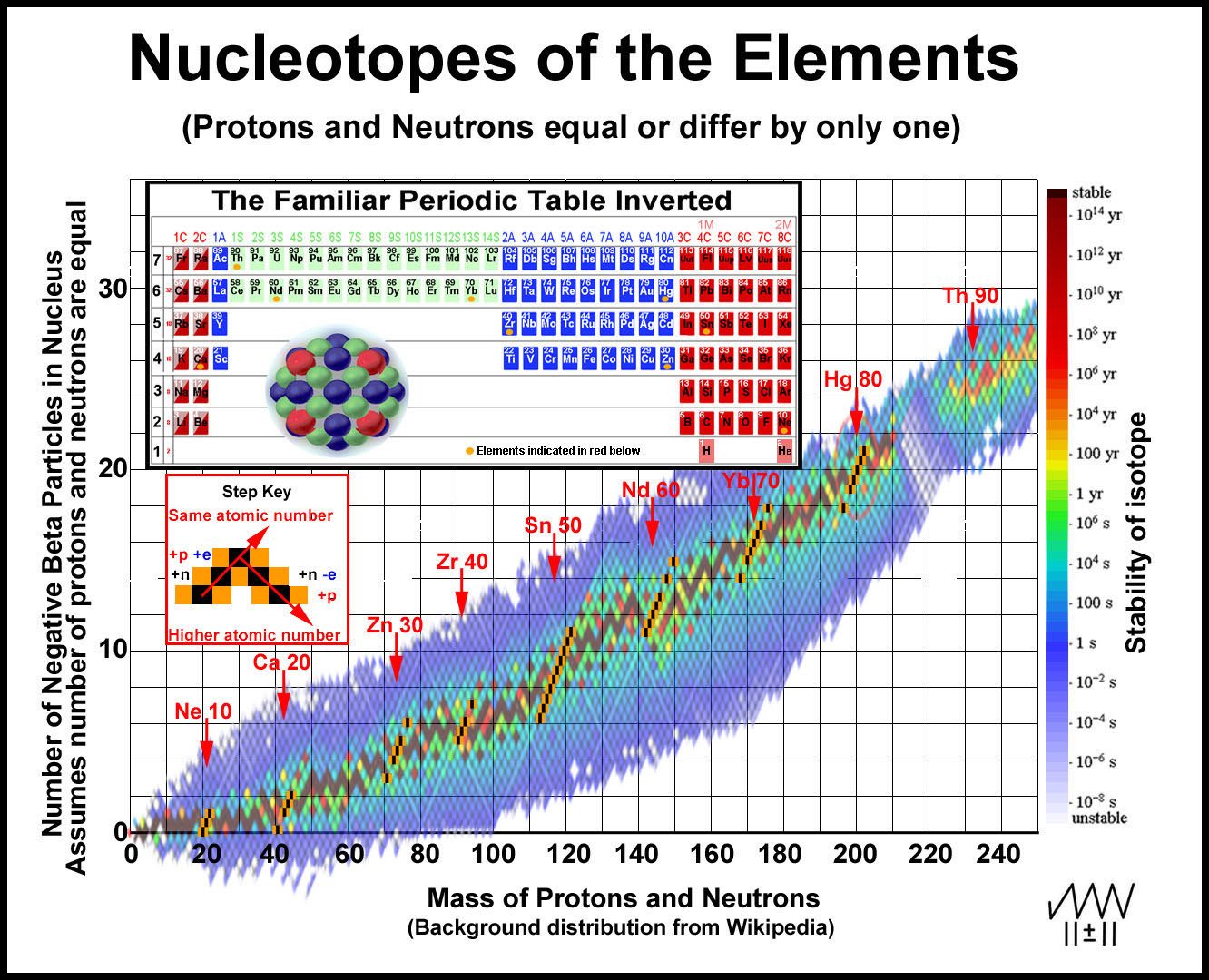 Isotopes of an element "step" with alternating "neutral baryonic pairs": (a neutron) and (a proton with a separate β- particle). Element to element changes of single mass units also "step", but do so with alternating "positive baryonic pairs": (a neutron minus a separate β- particle) and (a proton). Vertical changes from one element to another occur without a mass change, but with a β- particle release or addition. Horizontal changes from one element to another occur with a proton-neutron pair. Nuclear stability is related to the arrangement of the proton and neutron baryons with the added complication of accommodating the included β- particles. Some elements, e.g., Sn-50, have many possible stable nucleotopes and thus many stable isotopes. Promethium-61, on the other hand, has NO stable nucleotope arrangements and, thus, no stable isotopes. 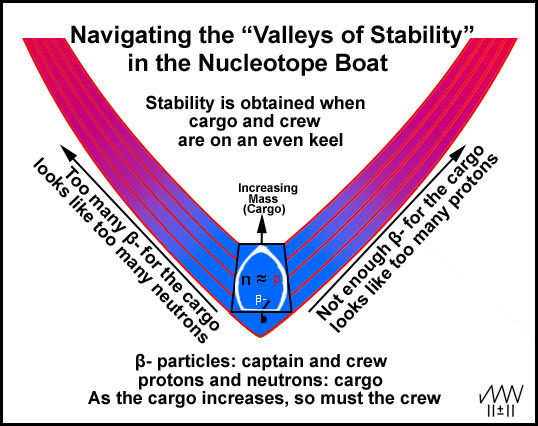 Why is there a relatively narrow "stability zone" or "Valleys of Stability"? Because the protons and neutrons need to be equal or not more than one or two in either direction! The zone's location shifts from the straight-and-narrow to accommodate the included β- particles. It is the β- particles that keep the nuclei on an even keel as the mass increases through the "Valleys of Stability" (Figure 6). As the cargo (mass) increases, more crew (β- particles) is needed. Sometimes the nuclear boat must navigate through some rocky stretches where the crew can find no stable arrangements. 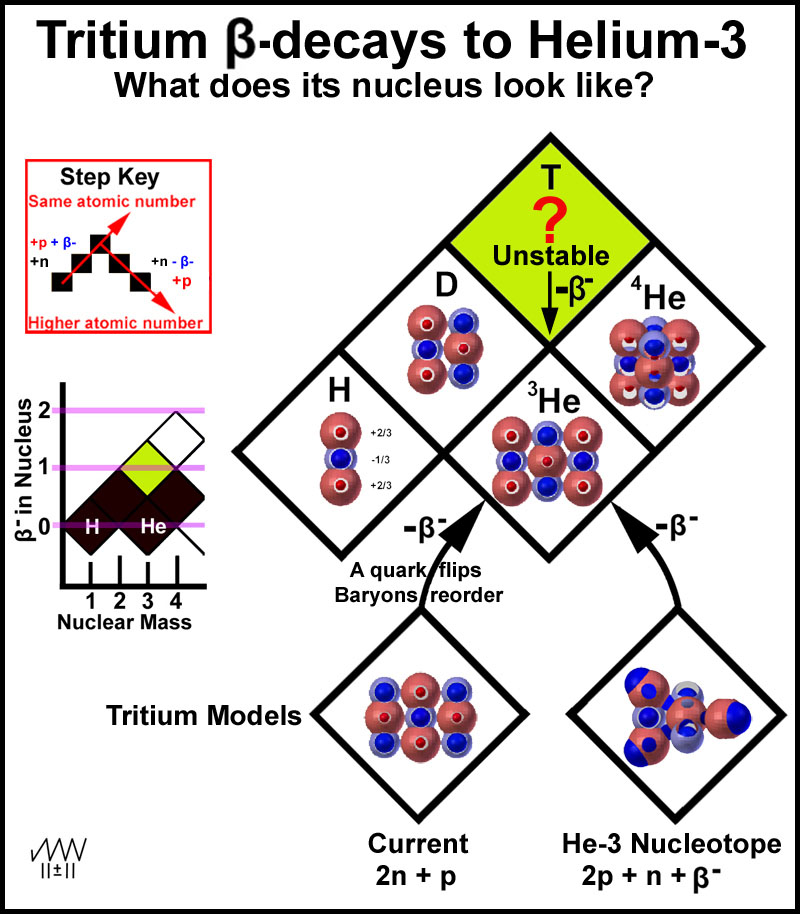 The hydrogen-helium isotopes provide a simple contrast between the nucleotope model and the current model with its over/under-loading of the nuclei with neutrons to produce the elemental isotopes. Dumbbell models of the stable nuclei of the +1 and +2 nuclei have been placed in the diamonds of Figure 7. The question is what model to put in the tritium diamond.

According to the step key of Figure 5, the tritium image should be the deuterium nucleus plus a proton plus a β- particle which is just the He-3 nucleus plus a β- particle! This, of course, is not the current model. The current and nucleotope dumbbell baryon models are shown at the bottom of Figure 7 for comparison. Both must liberate a β- particle as this is what tritium does to yield helium-3. The current model requires that a down quark be converted to an up quark with the β- particle being released in the process and that the baryons then reorder to produce maximum electrostatic interactions. Since most of the stable isotopes of the periodic table have many more neutrons than protons according to the current model, it is not clear why this model of tritium would have a propensity to decay at all.

Figure 7. Modeling the Isotopes of the First Two Elements 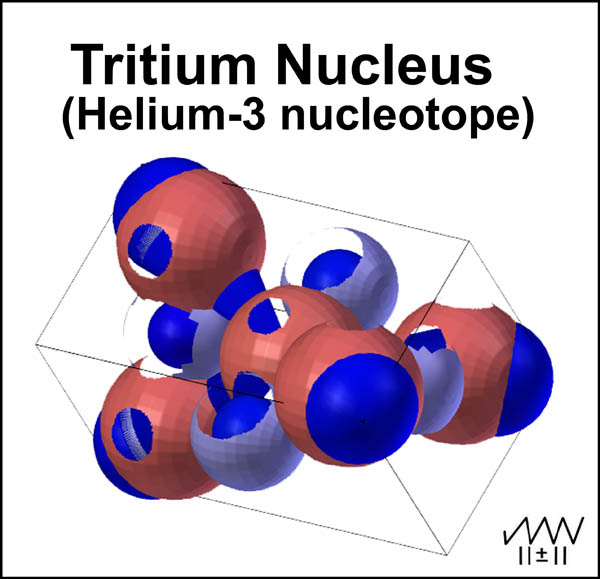 In contrast, the He-3 nucleotope tritium nucleus simply releases an included β- particle to yield the helium-3 nucleus. How is this β- particle incorporated in the tritium He-3 nucleus? It simply orbits, as indicated by the four blue orbital extremes in Figure 8, around the 5 +2/3 quarks in a manner similar to the tetrahedral movement of an external, nucleus-orbiting electron, ala the MCAS electron model9. What is the driving force for the decay of this nucleotope? The answer is the center neutron. This baryon has no single low energy position to provide ultimate stability. While the β- particle moves in its orbital path, the neutron oscillates in its plane. At some point, the down quarks of the neutron (light blue spheres) will be positioned just right to force the β- particle, as it move towards it outer limits, beyond its normal extreme and out of the nucleus. T-3 now decays to He-3 with nothing more than the β- particle and subsequent binding energy being released.

Analyzing the Binding Energy of Nuclei

What is binding energy, but mass that is no longer there and has become energy somewhere else? Binding energy is calculated by the following equation where the mass of the nucleus is independent of its constituents:

Binding energy per nuclear component using published data10 has been calculated for a number of elements and plotted11 in Figure 9. 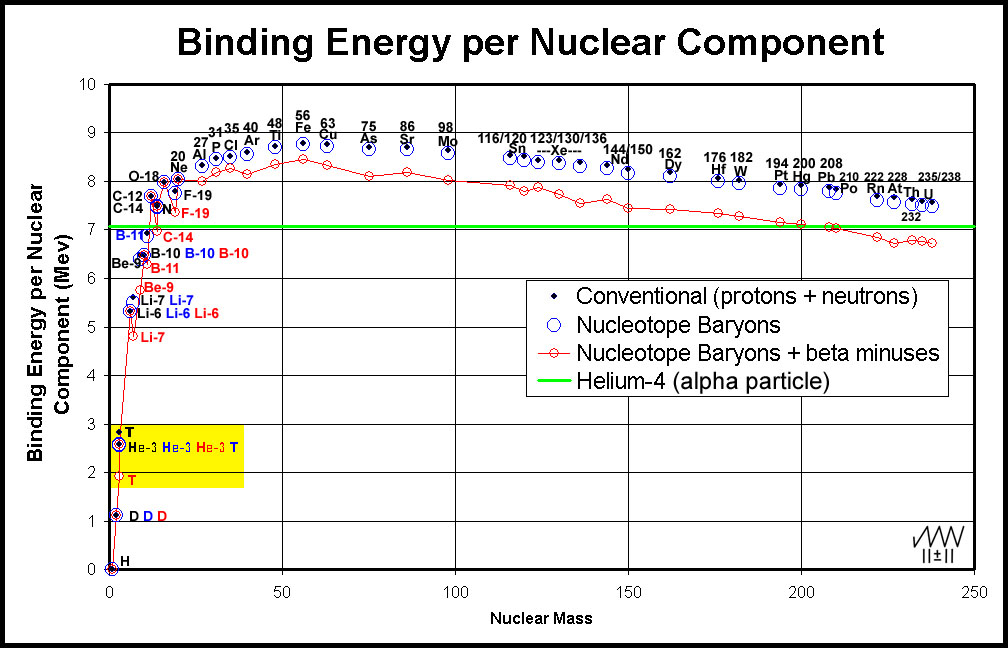 Attention is drawn to the trio of T and He-3 entries in the yellow rectangle in the lower left of Figure 9. The conventional determination of the binding energy (black dots) for tritium (T) and helium-3 (He-3) gives the binding energy per baryon of T greater than that of He-3. This is strange considering that T → He-3 + β- + energy. The enigma, of course, lies in the choice of starting nucleons.

In the conventional model, the nucleus has only baryons: protons (charge/atomic number) and neutrons (additional mass).

In the nucleotope model, a β- particle is included and the number of each baryon is reversed with the result that the binding energy of T and He-3 are approximately the same per baryon ― blue points in Figure 9.

Further examination of Figure 9 shows that, while the binding energy per nucleotope nucleon is less than that per baryon, significant "corrective" measures like that for tritium only occur for masses below 19 amu where a few β- particles in a nucleus of baryons makes a large difference in the nucleon number. Maximal bonding occurs at Fe regardless of the methodology.

Why do Elements above Lead release α-Particles?

__ (b) Feynman diagram: β+ decay of a proton into a neutron, http://hyperphysics.phy-astr.gsu.edu/hbase/forces/funfor.html